by Garvi Gujarati Staff 4 years ago7 months ago 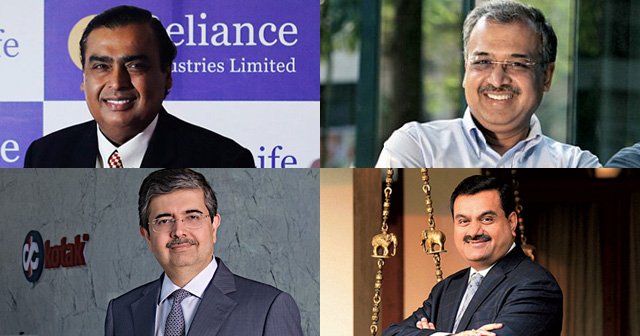 There’s probably something in the soil which makes Gujaratis unparalleled creators of wealth. Like the Jews who control the US economy, they rule the Rupee.

Owing to “ Potanu kaik karvu che”- the desire which manifests  in every Gujarati, It is just a matter of applying some Vaaniya buddhi to be consistently successful in this era of cut throat competition

Gujaratis  are among the most dominant communities when it comes to wealth creation, with Ambanis, Adanis, Shanghvis and Patels cornering a large number of top positions on the list of India’s richest 100 released by Forbes.

Industrialist Mukesh Ambani was named India’s richest person for a ninth year in a row with a sharp increase in networth to USD 22.7 billion, while his younger brother Anil Ambani was ranked 32nd with a networth of USD 3.4 billion.

This just goes to show how the global Gujarati knows no boundaries. We are not just talking about Gujaratis in the conventional sense. It is about everyone who greets the other with a ‘Kem Chho’.The list also features many Parsis, who migrated from Iran and landed in this coastal state many centuries ago.

Among the noted Parsis, Pallonji Mistry was ranked 5th on the coveted list with a networth of USD 13.9 billion, while the Godrej family was at the 7th place with USD 12.4 billion, followed by Cyrus Poonawalla (10th, USD 8.6 billion).

There isn’t an area where they have not created wealth and jobs — be it petrochemicals, engineering, finance, pharma, consumer products, software or real estate.

Other Gujaratis on the list include Pankaj Patel, ranked 23rd with a networth of USD 4.5 billion, Karsanbhai Patel (52, USD 2.24 billion), Rajesh Mehta (61, USD 1.88 billion) and Nirav Modi (71, USD 1.74 billion), among others. Shashi and Ravi Ruia, who have a networth of USD 5.8 billion, have a significant presence in Gujarat.

Gujaratis are born with a business acumen which can not be taught at any top B-School under the sun!